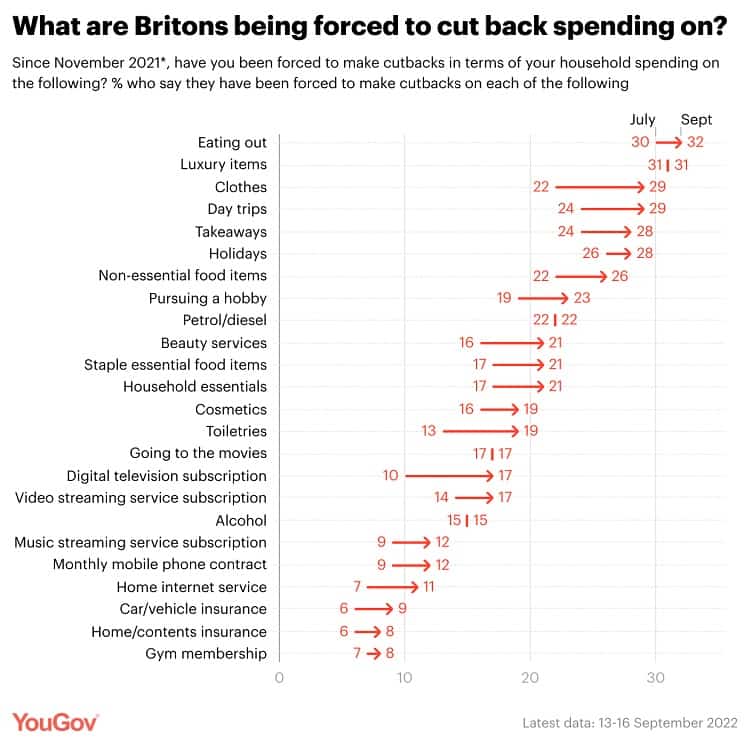 One in five Britons now say they have found themselves forced to make cut backs to their essential food item spending since last November, according to new polling by YouGov.

Among the lowest income households, those earning less than £20,000, 29% have had to make cuts to their staple food budget.

Even among households earning £60,000 or more per year, around one in nine have been forced to reduce spending on staple food items.

Non-essential areas of spending top the list of what Britons have been forced to cut back on. At the very top is dining out, which one in three say they’ve had to rein in their spending. This is followed by “luxury items” on 31%, clothes and day trips – both on 29% – and holidays and takeaways at 28% each.

Many Britons have found themselves forced to switch to cheaper alternatives. This is most likely to be the case when it comes to staple food items, which 16% of the public say they’ve had to do. The poll also shows that 13% have gone ‘downmarket’ with their non-essential food spending.

Another strategy some have been forced to pursue is to do some things less frequently. One in six Britons (16%) say they’ve had to spend money on petrol or diesel less often, implying they’ve cut back on driving. (As a percentage of drivers* this figure increases to 21%).

Similar numbers of Britons say they’ve been forced to dine out (16%) or get takeaways (14%) less frequently than before the cost of living crisis.

Whichever way you look at the results from the most recent YouGov poll, urgent action is required today from the chancellor on VAT and business rates as part of a package to alleviate the economic stress on all in the hospitality industry.