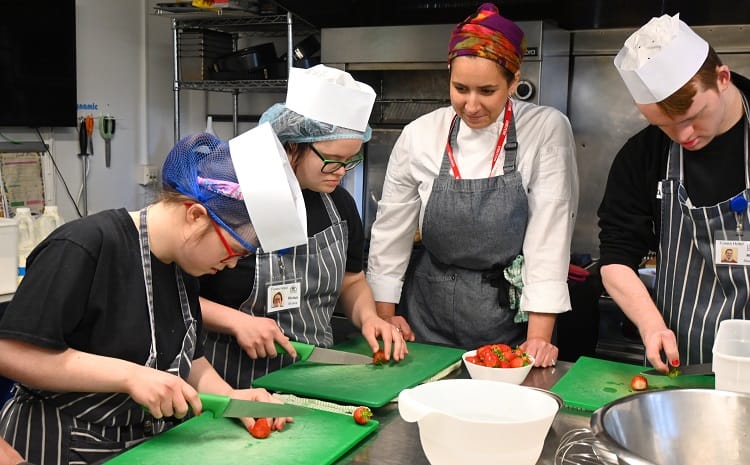 A Sodexo takeover of Aurora Foxes, a training hotel and catering college for young people with learning disabilities, took place last month to help develop students’ knowledge and skills and prepare them for work in the hospitality industry.

Over the course of the two-day takeover, Sodexo offered interactive learning experiences, such as participating in a practical baking session to create cakes that could be decorated and served as part of an afternoon tea service. The winners of the baking session won an afternoon tea cruise at Sodexo Live! venue, Bateaux London.

The practical sessions helped to teach the students valuable skills such as identifying workplace hazards, differentiating between recycling, reusing, and reducing, and how to help protect the environment by reducing waste. The students also learned how to identify healthy food options based on their calories and sugar content.

With a maximum of five students per session, the two-day programme had 30 one-hour sessions.12 Sodexo employees, including chefs from Sodexo Live! and the relevant experts from Sodexo’s government business, took part in the various sessions, ensuring that students received plenty of assistance and instruction from the professionals.

Following the two-day takeover, Sodexo will continue to work with Aurora Foxes by supporting them with mock interview sessions, assistance with CV writing, and Q&A sessions about working for Sodexo.

Mike Taylor, Learning and Development Manager at Sodexo Government, said: “We are delighted with how the takeover went. Working with the amazing young adults during their two days at Aurora Foxes was a highlight for the Sodexo team. We hope the sessions were enjoyable for the students and help to launch their careers in the hospitality sector.”

Emma Cobley MBE, Aurora Foxes Principal, added: “The Aurora Foxes takeover was a huge success. The students seemed to really enjoy it, and we hope that the experience will help them to apply the skills they learned to the hospitality industry, leading to sustainable employment when they leave. We look forward to collaborating with Sodexo again.”

Sodexo has worked with Aurora Foxes for over seven years and through the charity, Springboard. The organisations have supported each other at charitable events, and students from Aurora Foxes have gained employment and work experience at Sodexo client sites.

In September 2021, Sodexo had its Leader status in the UK Government’s Disability Confident scheme re-accredited for a further three years. The organisation first achieved Leader status in June 2018.

The accreditation is an external validation of Sodexo’s commitment to promoting the recruitment, engagement and development of people with disabilities.