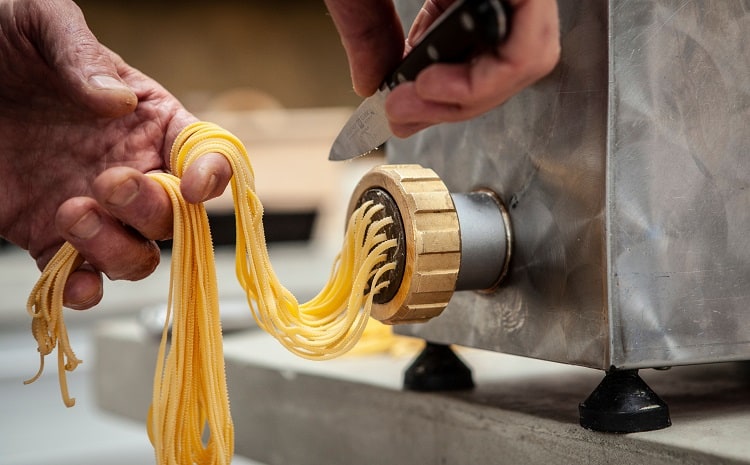 Phil Howard and business partner Julian Dyer are set to open their first bricks and mortar site on Monday 14th November. Having initially debuted as an online delivery service in May 2021, NOTTO will celebrate Phil’s love of pasta with its simple ingredient-led dishes served in the chic, all-day pasta bar located in Piccadilly.

To coincide with the launch, during open week (14th – 20th November), for each portion of pasta sold, NOTTO will donate the same to The Passage – a London-based charity offering a wide range of services and accommodation to meet the needs of London’s most vulnerable people.

Phil’s enthusiasm for fresh pasta will shine through in NOTTO’s menu offering delicious, authentic pasta dishes flanked by simple, freshly prepared snacks, starters and desserts. Eight pasta dishes will be available daily and will change according to the season, but highlights include: Gnocchetti with smashed sausage, white wine, fennel and chilli (£10); Pappardelle with slow cooked shin of beef, oxtail and red wine (£13); Bucatini with a ragout of autumn vegetables, mushrooms and chestnuts (£9); and Squid ink spaghetti with a sauce of sardines, garlic, sweet peppers and tomato (£13).

Snacks will come in the form of gorgeously plump olives, NOTTO’s rosemary, rock salt, tomato and garlic focaccia and endless crostini. Starters will see staples such as Vitello tonnato (veal served chilled with a creamy tuna mayonnaise-style sauce) given all the love they deserve. Deeply rooted in using extraordinarily good ingredients and recipes honed from Phil’s years of top-flight restaurant cooking, NOTTO will be an affordable and accessible concept celebrating the simplicity of Italian cuisine.

The 74-cover site will be stylish and casual with the focal point of the pasta bar an open central kitchen where the pasta magic is visible for all to see. The light-filled space will have a neutral colour palette – think stone-coloured walls, oversized rattan light shades, touches of olive-green mosaic tiles and wooden features – which will come together to evoke a warm and comfortable Italian trattoria.

Phil comments: “It would be fair to say that I have spent my career to date cooking a certain kind of ingredient at a certain kind of price point. I’ve loved it all, and continue to do so, but it is exciting however to have a project that can be delivered without compromise, at a price point that is wholly accessible to all. The fact that pasta is the medium is the icing on the cake and with the fantastic team we have in place the goal is simple – to bring pleasure to fellow Londoners by sharing authentic pasta dishes in a relaxed fun environment.”

NOTTO will soft launch with 50% off food only between Thursday 3rd November and Friday 9th November (reservations only) and open officially on Monday 14th November.