By Angela Green, Content Executive, H&C News: QEII welcomes new executive chef and four of his brigade, quite a coup. 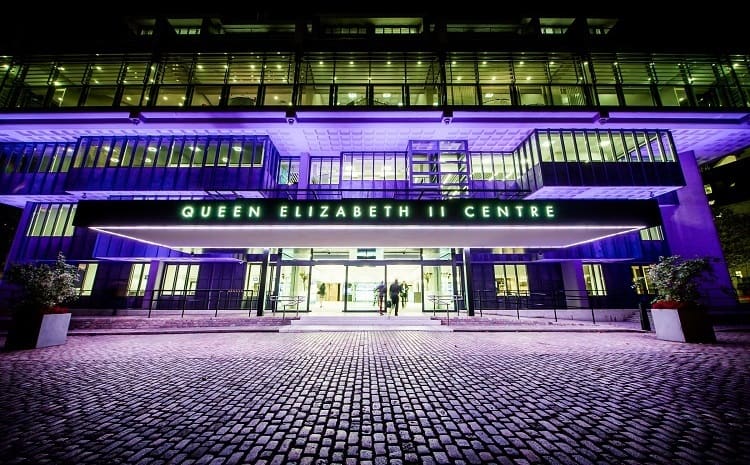 Barbagallo brings with him 30 years’ experience working in the restaurant and event catering sectors and a new team of chefs to continue to deliver exceptional guest dining experiences at the QEII Centre.

Barbagallo said of his team: “I already have a long working relationship with most of my new team and I am looking forward to working together with them at the QEII Centre.”

On the secret of building a successful team, he said: “I know we will be very busy in the coming months, but I will ensure that my team is happy. I think as long as you have a happy team and are working towards the same goal you can achieve great things.”

The team’s appointment comes at an exciting time for QEII Taste, by Levy UK + Ireland, which has recently applied innovative and sustainable approaches to its offering while remaining true to its core principles of quality, innovation and service.

Its new menus can be creatively served in three ways – onto a plate, in bowls or boxes. There has also been a greater focus on local sourcing and sustainability with the addition of more plant-based dishes and climate labels to demonstrate each dish’s carbon footprint allowing organisers and delegates to make informed decisions.

Barbagallo, who describes his cooking style as modern European, will continue to focus on using as many locally sourced and seasonal ingredients as possible to create dishes focussing on flavour for the new autumn and winter menu.

The chef, who joins QEII Taste from event caterer Payne & Gunter, which is also part of the Levy UK + Ireland family, has catered for a wide range of high-profile occasions and clients. He cooked for heads of state at COP26 in Glasgow last year and has cooked for royalty including HM The Queen and Princess Anne.

After 11 years working in restaurants in London, he moved into contract catering working at Bateaux London for Sodexo Prestige and for BaxterStorey before joining Payne & Gunter.

Jason Dignam, general manager of QEII Taste, said: “Danilo has such a wealth of experience and is a highly creative and talented chef, so we are thrilled that he has joined QEII Taste to lead our kitchen team. To have such a large and strong team of permanent chefs working alongside him at a time when staff shortages are so widespread across the industry is testament to his strong leadership skills. We are very excited to be able to move ahead with them to provide the excellent service QEII Taste is renowned for among our clients.”

Institute of Hospitality Golf Day in partnership with Caterer.com raises £5,225 for Youth Council