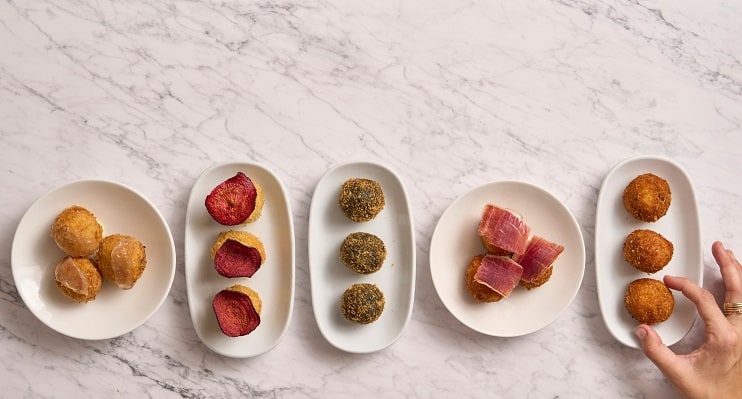 December 12th will see bar kroketa open their doors in a bustling corner of Carnaby at 21 Beak street, just off Kingly Court. The postage stamp-sized space will embody the spirit of Spanish bar culture, and they’ve singled out the croqueta as their signature dish, with blackboards listing a frequently changing selection.

A continental bar with Spain front and centre, this new space will be reminiscent of the bars which line the streets of Spain’s towns and cities. Some of the country’s finest ingredients will meet traditional and contemporary ideas in an unfussy menu with simplicity at its heart.

Transporting guests to a noisy yet welcoming corner of Spain, bar kroketa will be an informal affair: lean at a barrel or perch at the counter with a cold beer, vermút or cocktail, or find a cosy corner for a more leisurely lunch or dinner. Those looking for a quick kroketa fix can pull up a stool for a solo snack, whilst groups of friends jostle at the bar for a sherry and a gilda.

As well as their signature plate, bar kroketa’s open kitchen will serve a daily changing menu of small dishes, with a host of countertop snacks also available. Free from the formalities of a traditional restaurant menu, the space has been designed to give guests a true taste of Spanish bar culture with a lively, energised atmosphere and an ‘anything goes’ playful attitude, underpinned by a hard earned understanding and respect for Spanish cooking.

The initial selection of kroketas will include: sobrasada and goat’s curd with honey, girolle and pine with shaved idiazabal, a classic jamón with lardo and migas, blue cheese with crushed walnut, prawn & leek with prawn head alioli and salt cod with txakoli verjus alioli. From the kitchen small plates will comprise a crab & alioli toastie, chicken livers & cider onion toast with pancetta, spiced aubergine, curd, pine nuts and salsa verde and a lamb neck pintxo moruño marinated in kalimotxo. The team are keen to champion off cuts and offal when it comes to meat, and seasonality will be at the menu’s core. Counter dishes, served from the bar, include crisps and encurtidos, tomato pickle tartar, cheese taquitos with chestnut honey and coffee and gildas galore.

An extensive drinks program will be on offer, with a host of affordable Spanish wines sitting alongside sherry, vermút and sidra (done the Basque way) for the perfect aperitivo to accompany some bar snacks. The krok cellar will be on hand for wow factor wines. Expertly mixed cocktails will also be available, including the Kalimotxo Sour – a playful, modern take on an old school Basque tipple of red wine and coke, Krok Spritz made with fino sherry, fig liqueur and cava,  and the cider-based Basque & Stormy.