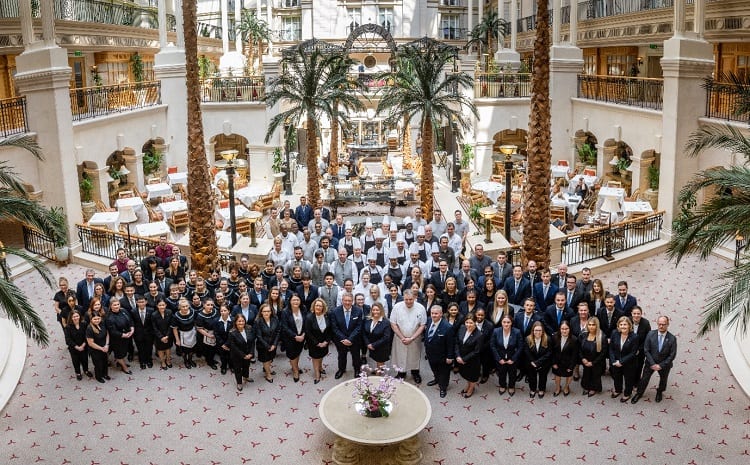 The Landmark London situated in the heart of Marylebone, has been awarded the prestigious Best Companies Award 2022 for its eighth year in a row, placing as the 11th Best Large Company to work for in the UK and the Number One Hotel in the list.

The award accreditation is based on a unique score generated by a survey that is conducted directly with employees to generate unbiased results and an accurate benchmark against which to compare engagement levels year-on-year.

For 2022, 91% of The Landmark London’s team members agreed that the organisation has a strong social conscience and gives something back to the local community. The hotel encourages guests to donate £1 from each bill to support a local charity. In 2021, the organisation donated over £25,500 to a number of charities including Macmillan, Springboard, and Cosmic. The 2022 charity is Debra, a national charity and patient support group for people living with the rare, extremely painful, genetic skin blistering condition, Epidermolysis Bullosa (EB) also known as ‘Butterfly Skin’.

When quizzed on progression, over 91% of the team at the hotel agreed their job was good for their own personal growth. Through its comprehensive buddy system, the hotel provides each employee with a clear structure of the learning available to them. In addition, 97% of the team agreed that their manager regularly expresses appreciation for a job well done.

Whilst one of the oldest railway hotels in London, The Landmark London has a modern day approach to HR processes. Working closely with the Dale Carnegie London, the hotel develops leadership and communication skills within its management and executive team. To inspire and motivate others they train topics such as ‘Effective Communication Skills’ and ‘Powerful Presentation Skills’, as well as running its ‘Landmark Development Academy’ for heads of departments, junior managers and apprentices. These initiatives allow the team to progress through various qualifications in customer service, team leadership, management and executive leadership programmes.

The Landmark London’s recruitment process has unique features, including an initiative where the whole team decides which candidate is offered the job, not just management. There’s also a referral scheme on offer with incentives for each successful recruit.

In early-2022, The Landmark London also introduced a scheme to allow its chefs to work a four-day week, with increased pay, as part of its continued commitment to invest in team wellbeing and improve the experience of individuals working in the hospitality industry.

Group Director of Human Resources at The Landmark London, Nicola Forshaw said: “We are so proud of all team members at The Landmark London. We are completely invested in our people, and we want them to have the best experience while working with us – it is our mission that every team member is a true ambassador. It’s an honour to receive such a credited accolade and be recognised as the top hotel in the list too.”

Fergus Stewart, General Manager at The Landmark London said, “One of our proudest achievements at The Landmark London is our incredible team and fantastic HR practices – this has led to a series of standout and recognised awards that identify our achievements and the hard work our incredible team put into everything they do. A happy and accomplished team is key to all success and it’s something we build into every decision we make for the hotel. We strive for five star treatment, not only for our guests, but our people too.”

The Landmark London has long been established a standout place to work. In 2020, The Landmark London was awarded the Healthy Workplace Award for investment in the health and wellbeing of its team during the pandemic. The same year, the hotel was ranked the best hotel to work at in the UK in 2020 in The Sunday Times ‘100 Best Companies to Work For’ list.

Led by core values of Respect, Integrity and Continuous Improvement, the HR initiatives at The Landmark London are an intrinsic part of the company vision and purpose, which has been recognised in the recent accreditation as the 11th Best Large Company to work for in the UK and the Number One Hotel on the list.