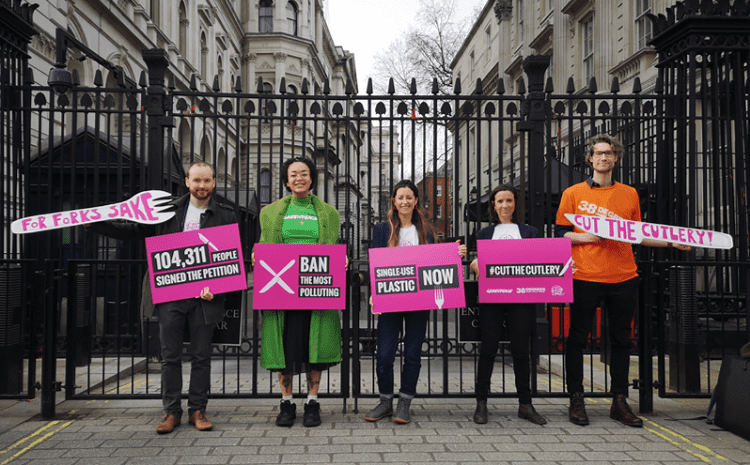 Environmentalists City to Sea and campaign group 38 Degrees have today criticised Defra’s inaction on banning some of the most polluting single-use plastics like plastic cutlery one year after they launched their consultation.

More than 50,000 members of the public responded to the consultation via the two organisations – with the overwhelming majority calling for a ban to be introduced as quickly as possible.

England now stands as the only country in Europe without legislation in place to ban polluting single-use plastics such as plastic plates, cutlery and expanded and extruded polystyrene cups and food containers.

These items, all included in the EU Single-Use Plastics Directive, have now been banned all across the EU since July 2021.

With the Government’s proposed start date of April 2023 looming, campaigners fear 12 months of inaction could also see this deadline missed.

Steve Hynd, City to Sea’s Policy Manager, commented: “We’re spending years chasing Defra to implement the very basic environmental standards that have been in place across Europe now for years. Their foot-dragging approach to tackling plastic pollution stands in stark contrast to the rhetoric of being ‘world leaders’ in tackling plastic pollution.”

He continued, “It’s time we lived up to our own billing. Let’s crack on and ban the most polluting items, set legally binding targets for reduction, and transition to reuse and refill. Then, and only then, we can play the role of ‘world leaders’ in pulling together an ambitious global plastics treaty. This option is open to the UK, but we need this government to start by playing catch up with other countries that have already introduced a ban on these most polluting single-use items like cutlery and polystyrene cups. This is the very minimum they should be doing.”

A petition organised by City to Sea and 38 Degrees saw over 118,000 sign up to demand action on banning plastic cutlery and was handed into Downing Street by campaigners during the consultation period.

For the consultation itself, a staggering 51,462 supporters of City to Sea and 38 Degrees participated in the consultation. Most respondents backed a ban on all the items being considered – such as cutlery, plates and polystyrene food containers – with support at 96% or above across the board.

Crucially, almost two-thirds (64%) said the ban should kick in sooner than the government’s April 2023 start date.

Almost two-thirds (64%) also said the ban should kick in sooner than the government’s April 2023 start date, with 35% agreeing with the proposed date. Just 2% said it should be later.

Importantly, 61% also said that bio-based, compostable and biodegradable plastics should also be banned – something that the campaigners have dubbed ‘critical’ for tackling plastic pollution.  The wide-scale use of material substitutes such as bioplastics should be regarded with caution. Bioplastics can be harmful to the environment and won’t shift people of companies away from a culture of throwaway packaging.

Megan Bentall, Head of Campaigns at 38 Degrees, said: “The Government asked what the public thought about banning these unnecessary and polluting plastic items, and the response couldn’t have been clearer. More than 50,000 people took the time to participate in a detailed consultation and yet, ever since, the Government seems to have been dragging its feet.

“After a year of inaction – in which companies have continued to churn out harmful, polluting and wasteful plastics – it’s time to see a proper ban. The public overwhelmingly supports such a ban – and they won’t accept further delays.”

The petition was part of City to Sea and Greenpeace’s #CutTheCutlery campaign which calls on the government to meet and exceed – in the quickest possible time frame – the EU’s own ban, which the bloc introduced back in July 2021 as part of its Single-Use Plastics Directive.

Once these very minimum standards have been introduced, the campaigners are calling on the government to go much further through the target setting process of the Environment Act. They’re calling for legally binding targets for single-use plastic reduction and reuse within the Environment Act – with the aim of a 50% reduction by 2025, and 25% of packaging to be reusable by 2025.