By Angela Green, Content Executive, H&C News: Congratulations to everyone at Oakman, changing the world, one coffee at a time. 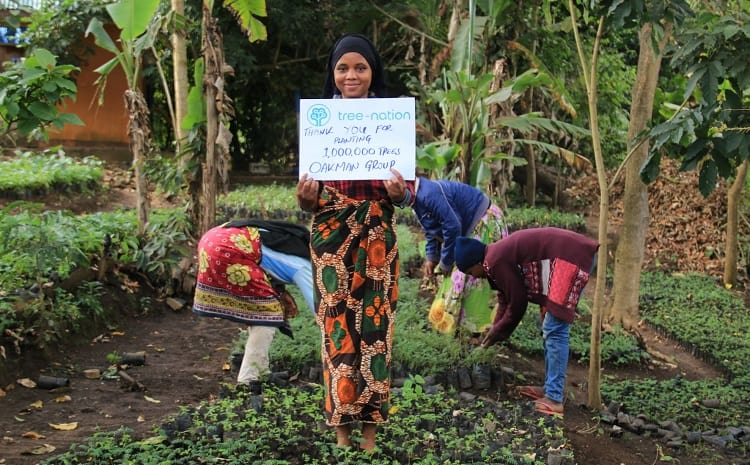 When Oakman Group was founded almost 15 years ago, its Founder and Chairman Peter Borg-Neal declared the pub company would leave things a little better than before – for their neighbours, guests, employees, the local communities they serve, and the wider environment.

One outcome of that policy was celebrated on Friday, 28th October, when Peter planted an Oak Tree (Quercus Palustris), along with help from team supervisor, Marisa Blackman, and Oakman’s Gardens and Sustainability Manager, Philip Jones, in the company’s recently opened 1.2 acre Oakman Kitchen Garden at The Akeman Inn in Kingswood (between Bicester and Aylesbury) to celebrate the company’s achievement of planting over one million trees.

The first 1,400 of those trees, one for every Oakman employee, were planted in September 2021, marking the start of their mission to plant a million trees a year.

Since then, through a collaboration with tree-nation, every cup of coffee sold across the group’s pubs and hotels has resulted in planting a tree, helping to offset some of the daily carbon emissions produced by the business and its stakeholders.

Eighty per cent of the trees are in Madagascar’s Eden project, with the other 20% planted in Tanzania in the Usambara Biodiversity Conservation project. That is almost 450 hectares of reforested land, representing some 50,000 tonnes of recaptured Co2 – all from selling around 2,500 cups of coffee per day across Oakman’s estate.

The three pubs in the Oakman Group contributing the greatest number of trees by dint of their daily coffee sales were the appropriately named Beech House in Beaconsfield, The Royal Foresters in Ascot and The Cherry Tree in Olney.

Chairman Peter Borg-Neal said: “Planting this young Oak, which might live for 1,000 years, is a simple commemoration of what small groups can do with little effort or personal impact, but which can have profound effects. For example, we were the first pub group to ban plastic straws, eventually leading to their national disappearance. We were the first pub group to install electric charging points in our new pub car parks. We always seek ways to make a difference without losing sight of our commercial responsibilities.

“We couldn’t have achieved our first year’s target without the support of our guests. To say thank you, on Friday morning before planting the Oak tree, all customers ordering a cup of coffee at any of our 40 pubs were given them on the house.”

Maxime Renaudin, the Founder & CEO of tree-nation, said: “A year ago, our sponsor, Oakman Group, committed to planting one tree with us for each coffee sold. One year later, they’ve reached the incredible milestone of one million trees! Congratulations to everyone at Oakman as well as all their customers who are changing the world, one coffee at a time.”