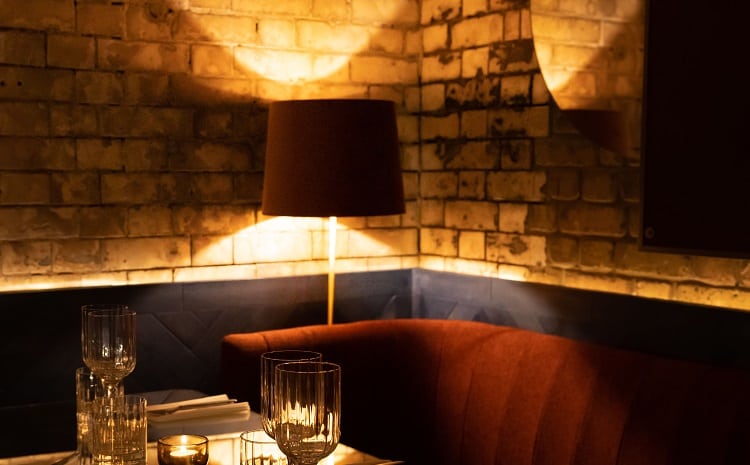 Drunch are set to open a new restaurant and speakeasy in Fitzrovia this autumn. Currently in soft launch, the new venue, on Great Titchfield Street will feature a menu of breakfast, brunch, lunch and dinner in addition to an extensive wine menu and cocktail selection.  It will also feature Kave, an exciting new hidden club lounge.

The kitchen will be headed up by Valerio Vivetti, who, during his 20 year career, has worked at leading hotels and Michelin stared restaurants across Europe and the USA. Highlights include Fairmont Hotel, California, Doppio Zero in San Francisco, Somma in Norway, Convivium Fulham and The Lanesborough.

Vivetti has created an all-day dining menu with Mediterranean influences for the 40 cover restaurant. There will be a bespoke a la carte menu, featuring Chef Vivetti’s signature dishes, such as Red Mazzara Prawns Carpaccio; Wagyu Toast; Alaskan King Crab and Ravioli Ricotta and Black Truffle.

Located below Drunch will be Kave, which guests can enter through a secretive unmarked door on Great Titchfield Street. The speakeasy has been beautifully restored from what was originally a Victorian baker’s kitchen and more recently an illegal gambling den where pet 10ft python snakes were kept.

The refurbishment has been incredibly sympathetic and ensures the original vaulted tiled ceilings have been maintained. Kave will feature an extensive cocktail menu, live named DJs, a sharing style menu with Mediterranean touches and a late licence, meaning guests can party into the early hours.

Owner Hom Malass commented: “We are thrilled to be expanding Drunch, with this venue we really want to push the foodie offering and have brought Chef Vivetti onboard to deliver this.

“When we found the Fitzrovia site we were delighted by the hidden space in the basement and immediately wanted to create a bespoke Speakeasy, a new concept for us. We can’t wait to open.”

The new opening and brand expansion has been overseen by Partner and Director of Drunch Fitzrovia, Luca Mazzoncini, who previously worked as Director of IT Restaurants (Ibiza, London, Milan, Tulum, Mykonos and Porto Cervo) alongside 2 stared Michelin chefs Gennaro Esposito and Nino di Costanzo. Mazzoncini has developed the brand and elevate the culinary offering with the aim of creating a foodie destination within the heart of Fitzrovia.

The interiors have been created by renowned designer Valerie von Bechtolsheim, whose previous clients include Gold Notting Hill. Valerie and her team have created a beautiful yet relaxed space with stunning chic contrasting colours and marble topped tables upstairs at Drunch. While downstairs at Kave the interiors offer a more club lounge aesthetic with a palate of deep reds and oranges, deep velvet sofas and a dedicated DJ booth with enough space to really let loose.

Drunch opened their first venue in Mayfair nine years ago and attracted a loyal clientele, which led to their second opening in Regent’s Park in 2017.  Drunch in Fitzrovia will represent their third opening in the Capital.