Back in 2008, when the country hit a recession and people were very worried about the money in their pockets, I was deep in the kitchen trying to work out how to strengthen and lay the foundations for a young business. Beth and I came up with what sounded like a ludicrous idea but could be fun…’why don’t we do a set lunch menu that’s price feels like it is too good to be true.’ So, we launched a one choice lunch menu that made absolutely no money but filled the pub with noise, excitement and laughter. It was incredibly motivating for staff and the team and it felt like the guests were having such a great time as it was such value for money. 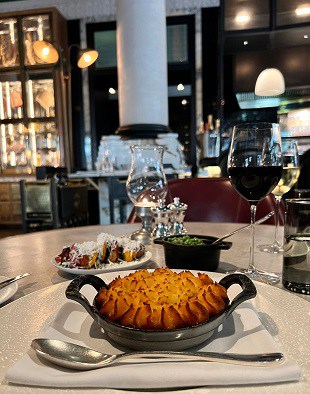 Now, in 2022, it feels like those times are here again. You can’t turn on the TV, look at social media or read a newspaper without the grim news of the cost-of-living crisis. So, it is time to bring back the ‘too good to be true’ offer. We are very excited to launch a set lunch £15 menu. Yes, that is right, £15 for two courses (a third course can be enjoyed for an additional £7.50), running across three of our sites. Kerridge’s Bar & Grill in the heart of London at The Corinthia, the one Michelin starred The Coach in Marlow, and the beautiful Bull & Bear in Manchester.

The same menu will run concurrently in all sites, headed up by Nick Beardshaw, Sarah Hayward and Connor Black and will be launching on Monday 5th September. The dishes will champion classic pub favourites or even school dinners, so expect cottage pie, lasagne and caramelized onion sausage with mash followed by old school desserts of spotted dick, jam roly poly and crumble and custard. The aim is to get the excitement and buzz back into restaurants without guests having the fear of spending too much money. A taste of the good times at a fraction of the price.

Please come and join us, and most importantly, make a booking in London, Manchester or Marlow.