‘A slice of Holme’ Phil’s Story is a hard-hitting and an authentic truth of a story of a person who lost their way. 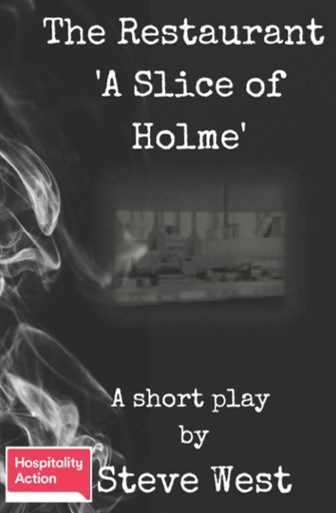 He didn’t notice the crossroads in his life where there may have been a slightest hope of survival. Phil’s story runs in tandem with the play, A Slice of Holme.

Throughout 2020 and now into 2022, Covid-19 is still having a massive impact on life for so many hospitality people from the industry, we are still living in unprecedented, fragile times where country-wide lockdowns forced restaurants, cafes and bars across the UK to close their doors and turn off the lights.

As Covid-19 devastatingly swept through the country, – now I find it worthwhile to write another story to help others in hospitality in hardship.

The story never ends as hospitality has opened – now more than ever, it is still imperative to reach out to help and as life gets more precarious for so many.

What parent can choose between heating, eating or fuel? The story is two-fold. One, to raise funds and awareness for Hospitality Action to support those families currently and for the future to place food on the table. The second, even though the characters are fictitious, the story is very real message as the narrative unfolds as ‘Phil’s Story’ is an invite inside the mind of a person on the brink of taking their own life.

There is something in an authentic truth. That is, in some cases it is unpalatable, unthinkable that a person can die though taking their own life. This is the awful truth, and it needs to be told. It needs to be revealed. ‘A Slice of Holme’ Phil’s Story delves into the mind of a young man who has reached the end.

As the story unfolds, it runs in tandem with the Play, ‘A Slice of Holme’ as the two worlds divide.

Phil is in hospital tortured with mental torment and anguish. You are privy to his mind as the narrative exposes the true blackness of his mind, heart and soul as the darkness defeats him.

It is 5 years after Covid-19 hit which brought the world to a standstill. A reset?

The story is set in a small village, Edenvale on the outskirts of a large city. Don’t be invisible, don’t be Phil. It may be unthinkable to read such a story, but it is real to so many. By exposing the truth of mental anguish, depression and then the inevitable end of suicide, it needs to be understood and my heartfelt intention to be written with sensitivity and in some way expose the authentic truth as it needs to be shamed.

The 11 Chapters include a ‘Normal day in the kitchen’ following on to a fight where Phil lies alone with his thoughts to ‘Two Worlds Divide’ and ‘Silent Ward Busy Mind’.

Follow his sister Tara as she comes to terms with the news and finality of Phil ‘Becomes invisible’.

Phil finally sends his message to you in ‘The Final Service’. He doesn’t want anyone to be broken. As he said in his message, “Don’t become broken, I didn’t realise people were there to fix me.

The Last order is in’. I am gone now”. There is a final chapter. It is chapter 1; it is for the reader to reawaken and find contacts and a tool to journal one’s life to not be lost. This isn’t an ordinary book. It’s a book dedicated to every chef, waiter, housekeeper and manger. Every concierge, receptionist and kitchen porter. Every sommelier, bartender, catering assistant and cook across the country. 100% of royalties from the sale of this book will go to Hospitality Action to help offer vital support to all who work within the hospitality industry in the UK.

Hospitality Action is the trade charity for the hospitality industry. Registered Charity number: 1101083.

‘A slice of Holme’ Phil’s Story, by Steve West is available to buy now on Amazon here.