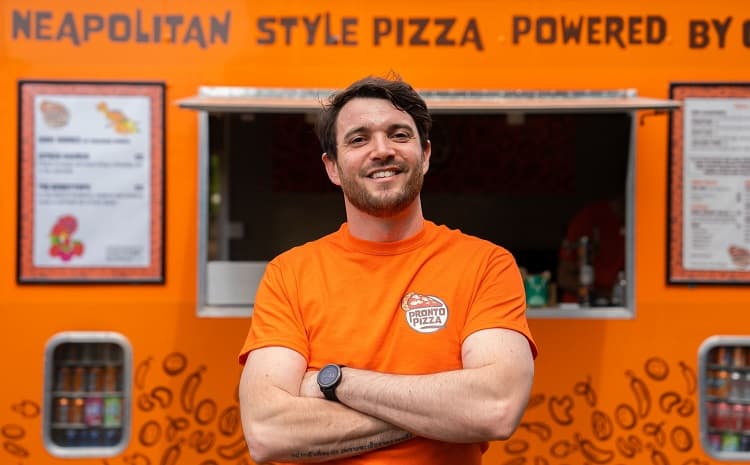 An Edinburgh street food entrepreneur is celebrating the opening of his third concept, underpinning plans to expand his business into a full-scale catering operation.

Michael Notarangelo, who set up from scratch after a planned career in mechanical engineering didn’t work out, has just launched Pronto Pizza, which serves Neapolitan-style pizzas, at Edinburgh Zoo.

The unit, which was conceived as a result of a request for a food trailer to be based at the zoo’s new hilltop dinosaur exhibit has been equipped with multiple Ooni ovens to serve pizzas in super-quick time and is already proving to be a big winner with visitors.

The zoo is the current home for Notarangelo’s two other food operations under his Belmonte Catering parent company. Dog n Bon Street Food, which specialises in gourmet hot dogs, bon bons and loaded fries, and Rolly’s Ice Cream, the first business of its type in Scotland which makes unique ice cream ‘rolls’.

Notarangelo has invested in a fourth food truck which will be based at various major events this year, in addition to Rolly’s being commissioned at private events and weddings across Scotland.

Notarangelo, 30, said: “After I graduated I got a job working on the new Queensferry Crossing but when that project was completed I found myself out of work and unable to find an engineering role suited to my skillset.

“It was on a trip to Thailand that I saw the opportunity to develop an ice cream rolls business based on the street food sellers there who first came up with the idea.

“The fact my granddad used to run an ice cream van after he emigrated from Italy to Edinburgh also had more than a passing inspiration.

“After securing funding, I set out to create my own bespoke operation called Rolly’s Ice Cream, developing and sourcing the equipment and conceiving all the branding and product development.

“From there, it has always been about thinking what next? So that’s where the focus came to develop a high quality street food operation, first with Dog n Bon and now Pronto Pizza.”

Notarangelo said despite the successes to date, and the challenges of running the operation and his team of 16 people, he does not want to stand still.

He added: “I’ve created a new Limited Company, Belmonte Catering, named after the village of our family home in Italy, where we plan to offer a range of services such as catering at events around Scotland and the UK and in further developing ties with conference organisers, venues and catering operations.

“My other main aim is to have a permanent base where we can not only centralise all operations but we can set up a home delivery service for all our food offerings.

“People love street food, especially if it’s fun, tasty and quick, and that’s what we’ve focused on doing and to be sure we do it exceptionally well.”

Notarangelo is about to take delivery of a new 18-feet purpose-built trailer that will replace the existing Dog n Bon truck at Edinburgh Zoo.

Ben Supple, Edinburgh Zoo director of engagement and business development, said: “We’re excited to be expanding our food offering here at Edinburgh Zoo. As a wildlife conservation charity and one of Scotland’s most iconic tourist attractions, we want to provide the best visitor experience possible.

“It’s important for us to support our communities, so we wanted to introduce local food vendors who share our sustainability values. Collaboration between communities is an essential part of making our charity’s wildlife conservation work possible, and in turn create a world where nature is protected, valued and loved.”