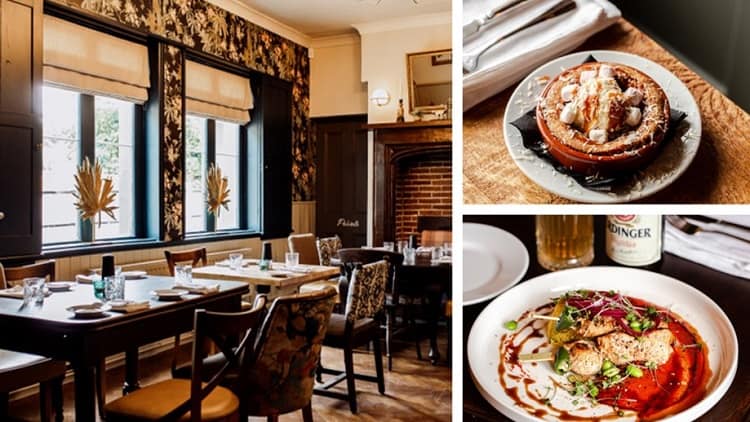 The George in Kilsby has reopened its doors after three years with a brand new look and exciting new food menu. The pub and restaurant has had a complete redesign inside, and now offers a varied menu of Indian-inspired dishes along with popular pub favourites.

At the helm is accomplished Midlands-based chef Hari Shankararkrishnamurthy, who takes over following a £330,000 investment by Star Pubs & Bars and aspires to make the venue a destination restaurant.

Chef Hari was classically trained in India and spent six months at three Michelin-starred Restaurant George Blanc in Vonnas, France, before going on to work at venues across the UK including Resorts World, Selfridges and Mowgli.

Hari also spent two years working on luxury cruise liners and his food style incorporates elements from many global cuisines. With the opportunity to now make his mark in his first restaurant, Hari wants to combine his extensive experience with his Keralan heritage to offer an exciting, varied menu at The George.

As a child growing up in India, Hari was responsible for taking freshly-roasted spices to have them milled for his family’s cooking.  In a role reversal, his mother will now dry-roast and grind spices and send them to him to use in his home-inspired dishes, such as Keralan Tiger Prawns, Olde Delhi Chicken and Tofu Tikka.

The varied menu will also include popular pub favourites such as burgers and wood-fired pizzas and grills. Vegan, vegetarian and Halal diets will be well catered for.

As well as a brand new menu, The George has a new look following a full renovation by the team at Concept Design. They have given the dated interior a fresh feel, adding floral patterns, teal blue tones and copper accents for a warm inviting feel. Original features such as the parquet flooring and Elizabethan-style windows, gables and chimneys have been renovated to retain the character of the former coaching inn.

The interior space has been restructured to allow for a central bar, creating a large open space for guests and a more accessible working environment for front of house staff.

Hari says: “It’s been a long time coming, due to various unforeseen delays, but I’m delighted to finally be able to open the doors of The George. The pub is looking fantastic and we have a great team who can’t wait to serve our guests. We look forward to re-establishing The George as a great place to drink and dine.” Institute of Hospitality Golf Day in partnership with Caterer.com raises £5,225 for Youth Council